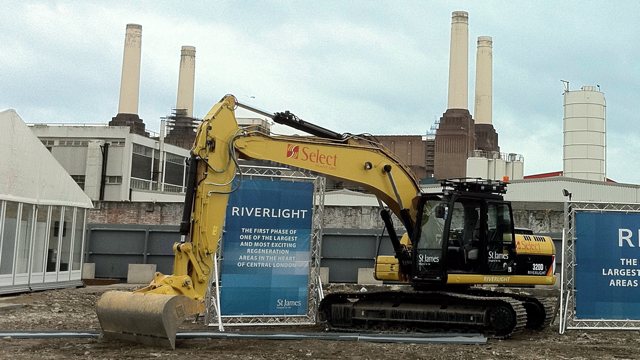 Before yesterday I’d never been to a ground-breaking. And never really understood them, it seemed an attempt to attach symbolism to an other arbitrary part of a process. But yesterday’s was different.

For a start Boris Johnson was doing the ground-breaking, and it’s always worth listening to him speak: and he was as entertaining as it was educational. Starting by suggesting the souvenir paperweight he’d been given may also be useful in defending himself from rioters, he declared the ‘Vauxhall Nine Elms Battersea’ designation unsuitable (and said he’d decided it should just be Battersea) went on to discuss the changing path of the Thames (which he congratulated on finally deciding to flow through the world’s greatest city) before finishing to “declare the ground shortly to be broken.”

The irony being that he didn’t actually break any ground; health and safety, you understand.

So it will fall to someone else to dig out that first patch of ground. But the symbolism is there nonetheless. After all these years, work is finally starting in Nine Elms. Riverlight is the first, and has moved from St James acquiring the site to work starting in under two years, but there is so much more to come: the US Embassy, Covent Garden Market and the Power Station itself.

Finally everyone will start seeing Nine Elms as more than sketches and computer-generated imagery, but a developing area and a new centre for Wandsworth and London.

One thought on “Work starts in Nine Elms”