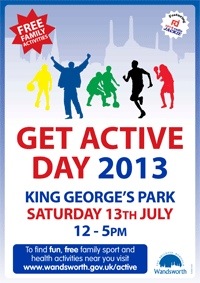 I can’t quite put my finger on why I’m so excited about them and why I’m promoting them here (especially since I was very remiss not to promote the Supply Chain and Open Day events in Nine Elms, taking place over the latter part of this week). In part it might be because I’ve become a particularly demented runner in the past few weeks, and am in a position where my lack of self-control hasn’t met my physical limits when it comes to distance.

More seriously it’s driven by the increasing general interest in health, and children’s health in particular, that comes from being a father. Wandsworth might not appear to have a problem at first sight. The amount of sport taking place in our parks and commons is huge and our recent success in winning the London Youth Games might suggest we have an active and healthy younger population.

I don’t know the absolute figures used, but based on the Wandsworth secondary school applications for that year (which don’t include private or out of borough) it would mean that year group had about 575 overweight or obese children, 70 more than if we were at the national average.

To make the situation worse, when mapped there is a clear correlation between deprivation and obesity.

While I’m always resistant to interventionist solutions (ultimately it is a matter of personal and parental responsibility) there are clearly issues, like education and access to opportunities. Though neither should really be a problem in Wandsworth (if anything we suffer from the tyranny of choice) this and next weekend’s events provide an ideal opportunity to sample lots of what is on offer all year round.