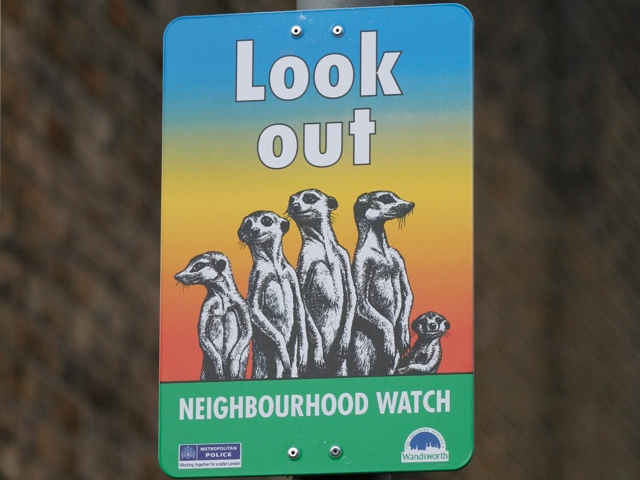 I used to be quite involved in Wandsworth Neighbourhood Watch in a strange, semi-detached, way as the cabinet member responsible for the council’s involvement in the scheme. Wandsworth Council is quite unusual in having taken on responsibility for running it from the police, and has traditionally had one of the strongest networks in the country. But that responsibility perhaps created meant focusing on the wood rather than the trees.

The council and police have recently highlighted a spate of burglaries in the ward, mainly in the roads between Lavender Hill and Clapham Common and while the police have done a lot to tackle that (fairly recently they made four arrests which combined accounted for a lot of the crime) they were also keen to see Neighbourhood Watches playing their part.

What struck me though, looking at a presentation they laid on, was how the north of the ward, the Shaftesbury Park Estate, had hardly any active Watches at all. I may have spent years being proud of the extensive Neighbourhood Watch network in Wandsworth, but had not noticed the decline on my front door.

It was a revelation for me. It’s been nearly three years since I had any responsibility, but even before, I’d never looked at the data mapped (which raises more thoughts on data visualisation that is for another time). Instead I’d focused on the overall number for the borough and the numbers per ward. Shaftesbury ward has always, and still does, fair well when compared to the rest of the borough and therefore never came to be a priority. Instead I focused on trying to innovate—by trying to create better networks and offering enhanced training—and work on those areas that were underrepresented—ward with high proportions of social housing have tended not to be involved.

The accepted wisdom has always been that there is a stronger sense of community in the Shaftesbury Park Estate and, therefore, an assumption that things like Neighbourhood Watch would thrive. This seems not to have been the case.

I did wonder about how we could turn that around, but that is also something for another time: I have to practice what I preach, which means starting, or at least trying to start, a Watch in my own street, but as a council service and with the council elections imminent it raises all sorts of issues regarding purdah that make it inappropriate for me to do anything until June.

That does not, however, prevent others from starting, and if you are in Shaftesbury Ward I’m happy to offer whatever support I can (just get in touch). You can get further information from the council’s Community Safety pages and the national Our Watch website.