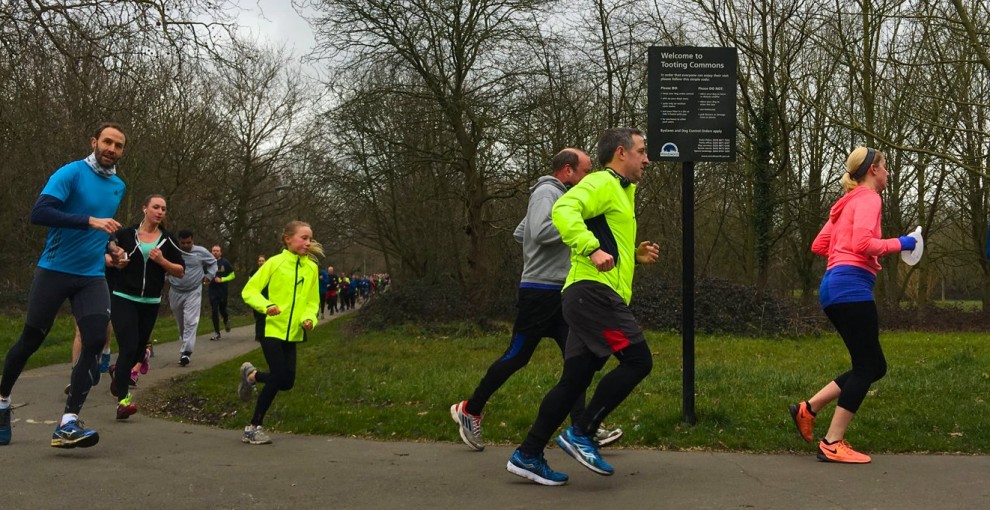 I found myself spending the early part of both Saturday and Sunday appreciating the effect running can have on a community. On Saturday I did my first volunteering stint at the Tooting parkrun. It was not an onerous task, acting as one of the marshals for the run. I took my son and we had a great time encouraging and congratulating runners and offering high fives to all those that needed them.

A few weeks into Wandsworth’s first parkrun it’s clear it’s generating a sense of community around the event and, to a degree, helping strengthen the community attached to the Common. Part of the marshalling job involved warning regular users of the Common about the runners (not that you can miss them) and not too inconvenienced.

I’d expected some annoyance or irritation, but all the non-parkrun users I spoke to were positive. Even those with no interest in taking part themselves seemed to appreciate the positive atmosphere. I can’t see how I’ll ever tire of seeing the magic that comes from the main pack of runners. There are, to be sure, some fast times recorded and I envy the speed and grace of those faster runners. But seeing those who come later, for whom parkrun provides that crucial opportunity for social exercise really highlights what a positive initiative it is.

My Sunday running, taking part in the North London Half Marathon, provided a slightly different perspective. The run, from Wembley Stadium to Allianz Park and back, goes through a lot of residential streets in Brent and Barnet. It must cause some inconvenience for residents, and I’m sure there are those that feel put out. But despite that it seems every road had groups of residents on the pavements, cheering runners on, offering jelly babies to give a bit of energy and, yes, giving plenty of high fives to the runners.

It’s too early to suggest a Wandsworth 10k or half-marathon—though the borough’s landmarks, parks and riverside would create an incredible route. I have broached similar events before, but the council is very resistant to close roads and levies big charges for doing so (the only time I’ve ever known the council willingly close roads was when the 2nd Royal Tank Regiment planned to parade in Battersea, presumably because they had tanks).

But while the Wandsworth half-marathon may be a pipe-dream, I can’t help thinking that even only a few months into the Tooting Common parkrun trial that it should only be the start, and not the extent, of such open sporting events in the borough.