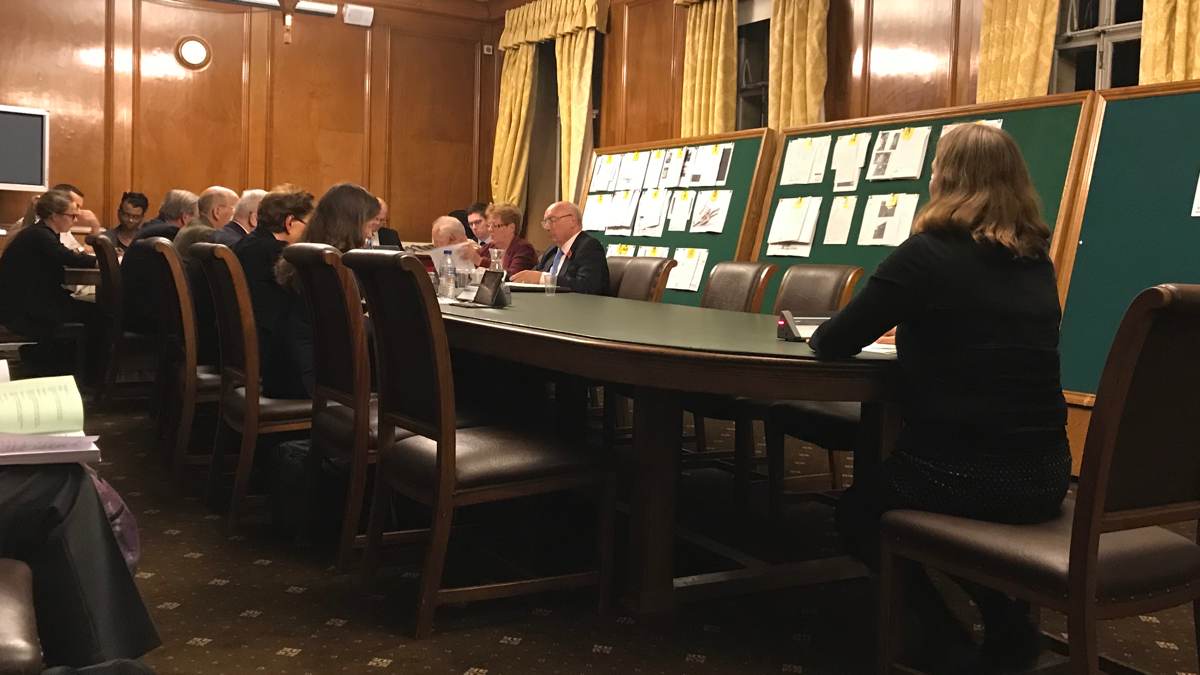 I’ve no doubt the planning applications committee are bored of me attending their meetings. I know the Conservative side have never reflected a point I made when representing residents (unless it happened to be a point also made by a Conservative) but I do think it’s important residents are represented.

I don’t think I have ever referred to any of those meetings in this blog though, since they are invariably very local issues and, I assumed, perhaps of limited interest. Indeed, this post is perhaps stimulated more by the Let’s Talk meeting (the echoes of Cllr Senior shouting about his role at a meeting he never attended, while criticising me for missing a meeting when, as I apologised to residents, I was on holiday) than by high-minded desires for transparency.

Since I once again find myself missing a meeting, this time unable to rearrange work and travel commitments to attend a meeting, I am hoping to avoid such unfounded accusations and instead am submitting my comments via email and publishing them below.

However, I did find myself, while drafting them, considering the council’s approach to planning policy. Many suspect, perhaps with good reason, that it favours the developer over local residents. It is certainly a view that many local residents have started to share having seen small, but contentious, applications decided in the favour of developers despite vociferous opposition. Policy is always the excuse.

But policy is (and should be) flexible, its implementation open to the exercise of discretion.

There are lots of factors to consider, and they do not always neatly align, so the committee has to choose how to apply them. A classic one in Wandsworth is affordable housing where it seems that, all too frequently, the committee is persuaded of the benefits of lowering that requirement.

It’s hard to escape the conclusion that the decision is not based on the scheme’s individual merits, or some discernible weighting of the factors, but on the desired outcome: which is usually to support the developer. While a small example I am amused by the Crosland Place application which in the space of three paragraphs is both close and not close to Clapham Junction, depending on which is most convenient to the approval recommendation.

Perhaps this is unsurprising. Leading councillors have very close relationships with developers and lobbyists. The planning department spend a lot of time talking with the same developers about their applications which are refined and honed before they are ever made; no time is spent with residents who might have different opinions.

But the flexibility that leaves people feeling planning favours developers could also be used to reach decisions that favour local residents; that leaves them believing the council is on their side. Unfortunately I fear we’ve a long way to go until we are there.

My email comments to the planning applications committee on Crosland Place (application 2017/3214):

Residents asked me to represent them on this application. Unfortunately I have not been able to rearrange work and travel commitments to enable me to attend the committee, but I hope members will permit me some comments on this application by email.

Residents and others have commented on some of the more practical points, including the overlooking, loss of outlook, overshadowing and parking concerns.

It is difficult to ignore these issues. Car use is declining, but the area surrounding Crosland Place still has high demand for parking spaces and it’s hard to imagine there will never be demand from Crosland Place residents (current policy would allow 10 or 11 parking spaces for a scheme of this size). And while the developer has addressed some of the overlooking concerns it remains the case that there is significant overlooking, particularly of the gardens and rear of no. 13 and other neighbouring properties.

The council’s policy DMS 1a and 1c requires “buildings ensure a high level of physical integration with their surroundings” and avoid harming “the amenity of occupiers/users and nearby properties through unacceptable noise, vibration, traffic congestion, air pollution, overshadowing, overbearing, unsatisfactory outlook, privacy or sunlight/daylight.”

This scheme fails on both counts. It does not easily fit into the style of Victorian buildings in the area, but it’s not just the aesthetic impact that affects the nearby residents. Taking the building to the northern edge of the site will deprive Craven Mews residents with south facing windows of significant levels of direct sunlight. The element of the building adjacent to the garden of 13 Taybridge Road will overlook significant amounts of private space of the residents at 13 and beyond. All those who have windows that face onto the site will see the quality of their outlook reduced, but especially those who live at the lower numbers of Taybridge Road who will have residential properties a short distance from their rear windows (even if the apertures in the walls have been removed from the first floor, the perception of loss of privacy remains and impacts quality of life).

I would also like to address some broader matters.

Cllr Belton commented at the last committee that my points about the history of the site were not relevant. A point on which I must disagree (and to which I will return), although recently it has fallen into disuse the site has a history of employment.

While the report plays this down, stating that it is not in an employment cluster, it is close to the Clapham Junction town centre (the report takes the usual planning approach of judging distance based on desired outcome rather than as an objective measure, stating it’s “not near to a town centre” in paragraph 1.4, while also stating it’s “close to Clapham Junction town centre” in paragraph 1.7), immediately adjacent to the Lavender Hill/Queenstown Road local centre and is a close neighbour of the fully occupied Battersea Business Centre.

Given that a significant proportion of employment currently being created is through self-employment and small business we should not be so easily relinquishing B1 space. Local plan 4.49 and 4.64 are particularly relevant to this, stating it “is important that new housing is not provided at the expense of employment land needed to support the prosperous, local economy in Wandsworth” and seeks “employment floorspace specifically targeted at the needs of the local economy, in particular the provision of flexible business space will be sought … to cater for the full range of Class B1 uses to accommodate a range of business uses.” While paragraph 1.5 of the application report argues that employment space is not enough to merit rejection on its own, this should be given some weight, and I would argue far more than the report suggests, by the committee.

The scheme gives the impression of being designed to avoid triggering the affordable housing requirement. The total space of the nine proposed units has, by my reckoning, 108 sq. m. of space above the London Plan requirements (although unit 8 is currently slightly under standard). Almost enough for two 1-bed apartments, or for 11 2-bed, 3-people apartments over two floors if the scheme were reconfigured that way.

While spacious, the committee may want to consider whether this part of inner London would benefit more from affordable housing than a few lucky owners (or perhaps more likely private tenants) would from those extra square metres.

To return to Cllr Belton’s point, I accept there is a limited role for local history in a planning decision. However, if planning policy is to have meaning to local residents it should be able to reflect their community, of which their history is part. This is an application that does not complement the local area, and offers very little—if anything—to compensate for that. I hope members can reflect local opinion, and policy, and reject the application.