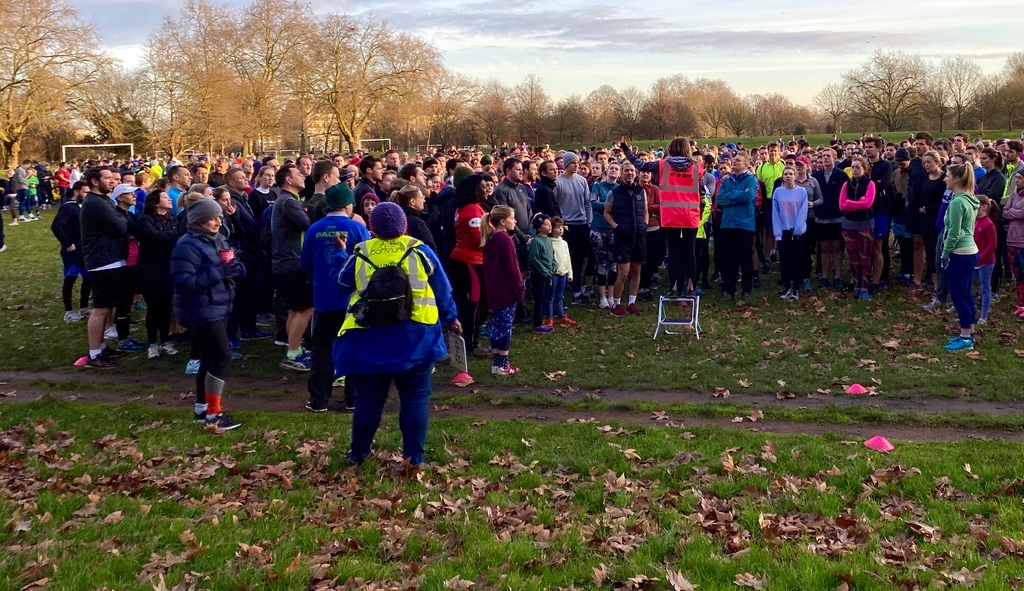 A few hundred people listening to the first-timers’ briefing Clapham Common parkrun this morning. There a touch over 1,100 runners and walkers in total, the biggest one ever (until next week, which is likely to be even bigger).

I’d always, intellectually, understood the benefits of parkrun but it wasn’t until I got involved with Clapham Common that I realised how powerful it is, not just because of the physical activity, but also because of the sense of community and volunteering it entails. However you might want to be involved I can not recommend it highly enough.

Having never heard of Alisdair Gray I find myself almost in love with a quote he used but attributes to someone else:

Work as if you live in the early days of a better nation.

Having just done my anxiety-provoking Secret Santa there’s a lot I agree with in There’s No Fun Like Mandatory Office Holiday Fun.

I also loved the opening:

In exchange for a salary, office workers do a great many dreadful things: sit through meetings, make the trek to and from work each day, feign enthusiasm for their employer’s particular vision. 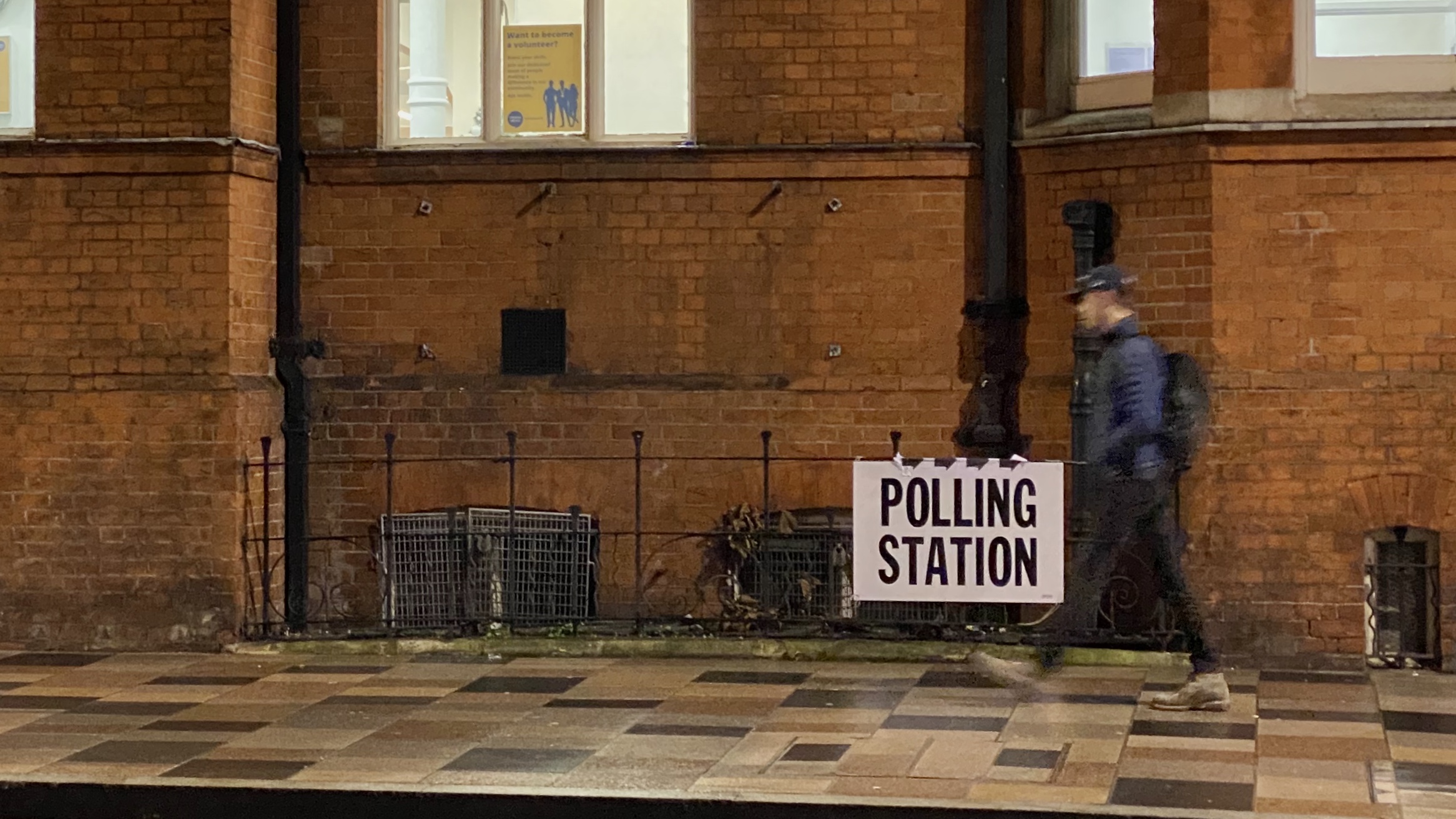 Had to queue to vote today. First time I’ve ever seen that.

But for all the progressive optimism in my queue I worry that there were lots of (what I would think) the wrong type of queue in lots of the wrong places.

Many years ago when I was dabbling in student politics RON was a candidate at the bottom of every ballot paper. If you didn’t like the candidates a vote for RON, or re-open nominations, was there to express that opinion. And if RON won, it was back to square one for the election as if it hadn’t happened. I managed to get RONned once, losing my first bid to become college president (in a fit of stupidity I stood again, this time winning but having learned a valuable lesson about hubris).

The general election has left me thinking about the RON option a lot, wondering if it might be the winner in an election where it’s so hard to feel positively towards either of the two main parties. Despite my past (which I increasingly try to keep secret) as an elected Conservative I just cannot see why anyone would vote for a Conservative Party that seems to be led by people whose only vision is that governing is their birthright and have absolutely no capacity for empathy. But it’s equally hard to come up with positive reasons to vote for a Labour Party that clearly has a problem with anti-Semitism and, more generally, with tolerating  anyone who is not an adherent to the particular Corbyn brand of Labour. How lovely it must have been to live in a period of political consensus when people in politics were mature grown-ups who could tolerate difference.

And how lovely it must be to live in a constituency where you are not forced into voting for a least worst option with the moral ambiguity that entails.

I have spent a long time thinking about how to choose that least worse option. Can you net off Labour anti-Semitism by the fact that the Tories appear to be anti-everyone? Is Johnson worse for having no principles than Corbyn is for having strong principles with which you disagree? And how do you decide between a shadow Cabinet with some lamentably weak members and an actual Cabinet in which any form of intellectual ability seems to be a disqualification from office?

Of course, this is to make it more of a dilemma than it actually is: Brexit looms large over the election and, as such, the only option I have is to vote tactically. Personally, I could never vote for a Conservative Party that has moved so far to the extremes. It is delightful that Boris Johnson has been able to satisfy his personal ambition and so many Tory members get to indulge their fetishistic prejudice that it’s the foreigner that ills this country, I just don’t think making the country poorer and weaker and depriving the next generations of opportunity is a price worth paying for that.

There are lots of reasons to be pessimistic about tomorrow’s election but if you have any sense that Britain should be a proud, progression nation voting tactically will keep the hope alive.

For me it just isn’t Christmas until John McClane is jumping from the Christmas tree.

Fitbit to be acquired by Google.

While Halloween might have been fun I’m most looking forward to leaving a small glass of sherry and a mince pie out for Father Brexit, only to discover he hasn’t come tonight. (Sadly it might be the last time I can do this.)

Finally having to install Word on a new laptop after resisting for a long time. It feels a bit, um, dirty.

I often tell people that (removing the obvious things like being a husband and father) being a school governor has been the most rewarding experience of my life. This is not hyperbole: I’ve been a governor at Shaftesbury Park for a long time now and feel a little prouder every day.

I’m especially proud of the school’s mission. The school has gone through a lot of changes in recent years and, as part of that, drew up a vision in consultation with staff, parents and pupils that represented what the school was. In a wordy way. It got everything in but looking back it’s clear that in doing so it left the essence of the school diluted in the statement.

Five years on it was time for a refresh. But this time the vision just appeared:

And it nails what the school does.

It uses the International Primary Curriculum to not to impart facts but to encourage children to think widely around themes and develop their own views. It uses the French bilingual stream not just as a language but as a cultural gateway. And it uses the Enterprise stream to teach the skills like planning, teamwork and leadership so they thrive in whatever world they find themselves in.

Technically the vision is a circular because the elements reinforce and compound. (An idea shamelessly stolen from Battersea Arts Centre.) And I like it so much I sprung for some stickers.

Thanks to Simon Wilson for the inspiration and Diginate for the vinyl. I’m hoping I’ll see them in the school stuck on laptops, diaries, notebooks and ID lanyards to act as a reminder that education is a process although I know that the school’s staff don’t really need a reminder.

The Goveian obsession may be exams, test results and pricey Bibles but developing pupils who have curiosity, confidence and capability is at the heart of what education really offers children and the country. Good academic results will flow from that and because they can be measured they will be measured. The real benefits will be less tangible but I know that every pupil going through that school will feel them for the rest of their lives.