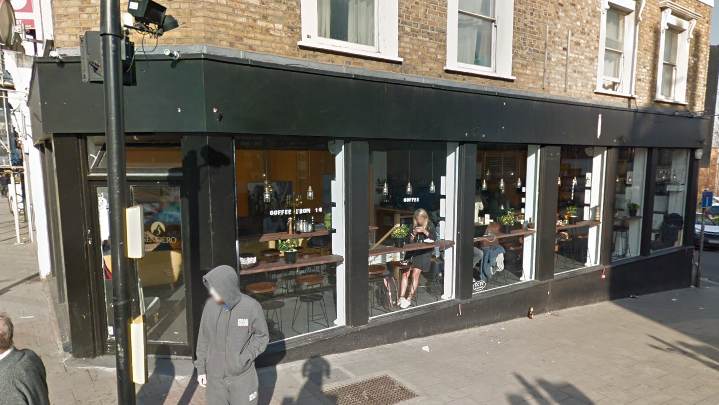 Sendero coffee, a relatively new addition to Lavender Hill (on the corner of Lavender Hill and Queenstown Road), has applied for an licence to permit additional sales and activity.

The application is for:

Sendero is primarily a coffee shop (and a good one to boot, I’d highly recommend it) and I think it is a good addition to Lavender Hill, providing an attractive destination at the less desirable end of a road that, despite its potential, always seems to struggle.

This licence application is not that big and largely within the council’s policy. However, you might think it moves the shop away from being a coffee shop to something else although with only the upstairs flats as immediate neighbours it might be a suitable venue for later opening and quiet entertainment.

If you want to make a representation you have until 6 October. Representations must relate to the four licensing objectives: 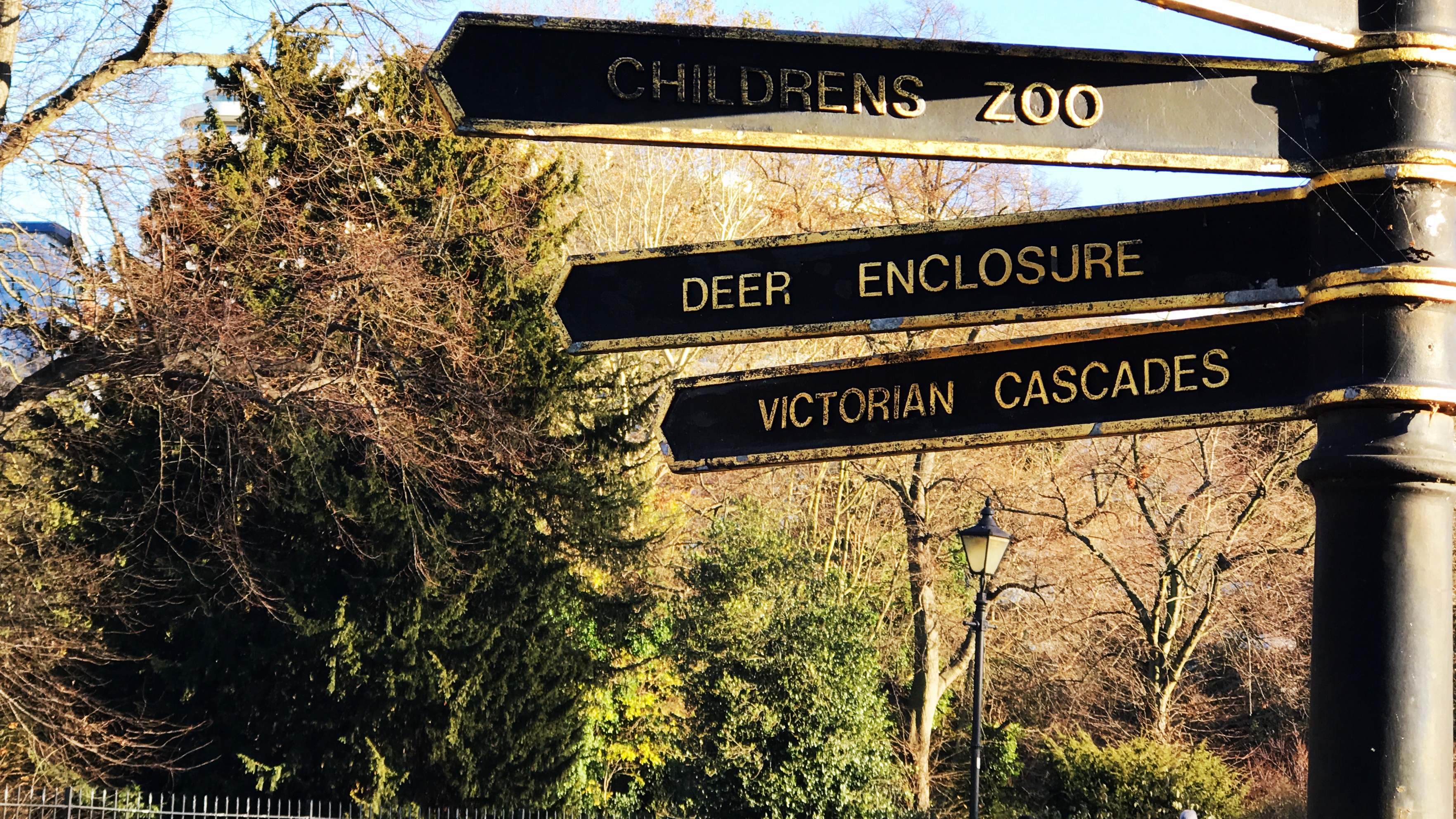 I do rather like this sign, since to me it harks back to Battersea Park’s Victorian heritage (if I’m honest I have no idea if the deer were one of the original features).

The deer were removed in 2001, ostensibly as a temporary measure, during the outbreak of foot and mouth. There was never any intention for them to return—the removal was an opportunistic council cut—but the sign remains near the café on East Carriage Drive hinting at the possibility they might one day be back.

Occasionally it even points the right way. 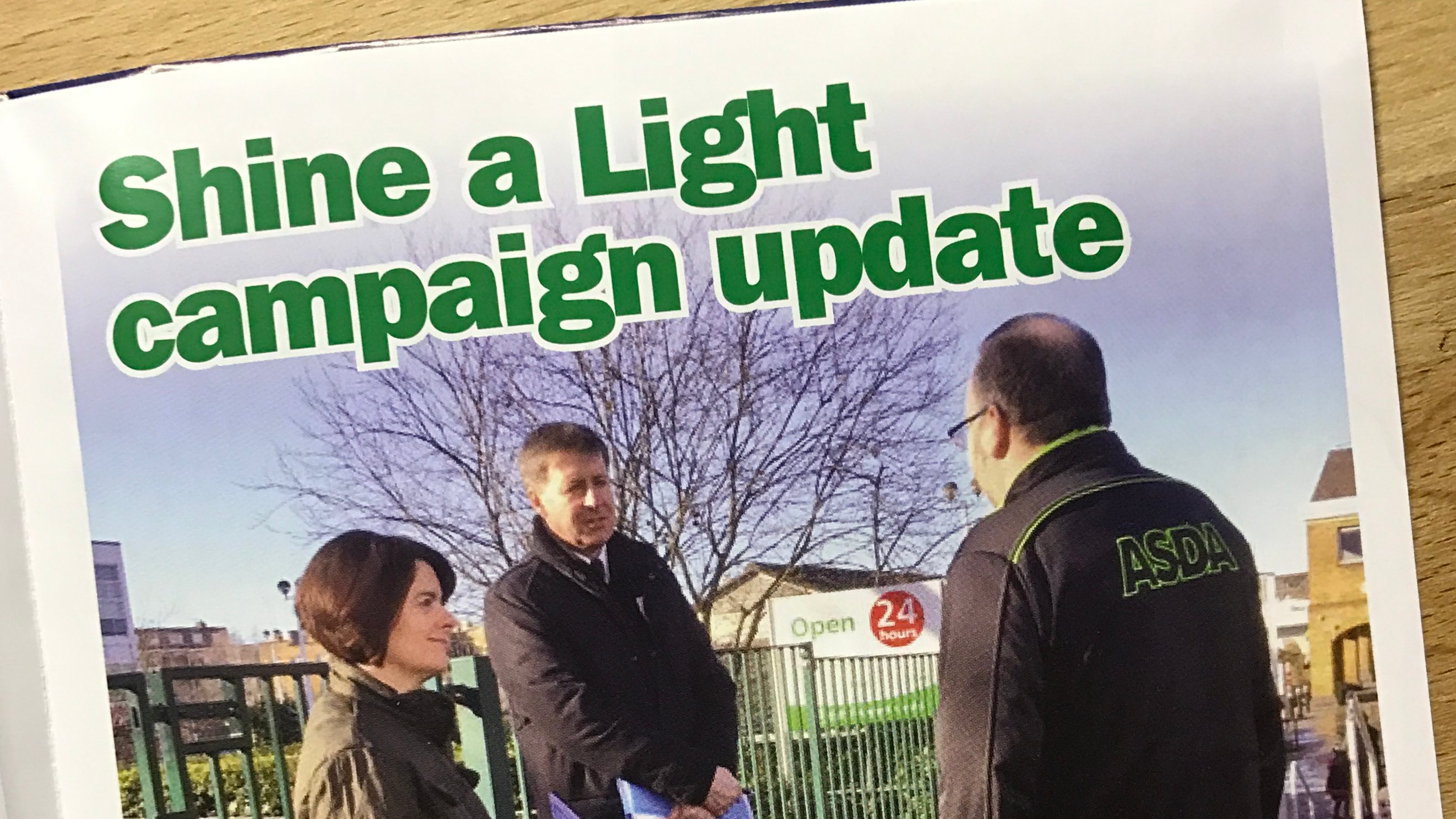 I was at my petty worst when I received a copy of Battersea MP Jane Ellison’s reporting back leaflet talking about her Shine a Light campaign and featuring a photo of her by the newly installed light in Dorothy Gardens. Falling into that very 21st century frailty of passive aggressively tweeting in haste and repenting, or ruminating, at leisure.

Of course, the bigger part of me knows that I should consider my fondness for the (attributed) Truman quote: “It’s amazing what you can achieve when you don’t care who takes credit.” The petty part wasn’t listening.

I struggled with this one. I’d been trying, on and off, to get a light installed there for over ten years. The most recent attempt, which was ultimately successful, was prompted by yet another resident contacting me about it. Together, and later joined by another nearby resident, we spent dark winter evenings collecting petition signatures from local residents and people using the passageway.

The call for a light was rejected by Cllr Jonathan Cook when it went to his council committee, despite the report not being entirely accurate. But another opportunity was on the horizon and I submitted a bid to the Wandsworth Local Fund to get a light installed. This gained the support of Tony Belton, Simon Hogg (Labour councillors from the neighbouring Latchmere ward) and, somewhat ironically, Jonathan Cook and was successful in getting funding. Hence the light that is there today.

It was surprisingly easy in the end. Almost disappointingly so. After ten years it almost felt like the end should have been harder than filling out a relatively short form. But equally, it took ten years (that I spent most of them on the council’s Leader’s Group speaks either to my staggering incompetence or just how very hard it is to get the council to say ‘yes’ to something) and it was a project to which I had become attached.

All the other lights

Why Jane Ellison chose to feature the site so prominently on her leaflet did puzzle me though. My first instinct was, uncharitably, that perhaps there were no lights that had been installed as a consequence of her Shine a Light campaign. I then wondered if it was just a useful proxy, a photogenic and recognisable location that would represent the issue, since other places might be less than pleasant alleys and tunnels.

So I contacted Jane Ellison asking for details of her other successes. Below I present a complete list of all the lights installed as a result of her campaign.

To be fair, she just didn’t bother responding. And frankly, why should she? She’s an MP and minister and has better things to do than respond to the tantrums of a slightly petulant independent councillor, however politely written those tantrums may be.

Of course, I know my attitude is deeply unappealing. It’s exactly the sort of behaviour I know I wouldn’t want my children to see and certainly not to exhibit. (Although I suppose I do like them taking pride in their own work and wouldn’t want them seeking credit for the work of others.) In this case, though, I’ll live with my hypocrisy.

I was upset that Jane was pushing a leaflet through doors effectively taking credit for the light I felt I had been responsible for delivering: it may not be much, but it’s one of the few things I feel I have to my name. While I’ve had more than enough exposure to politics and politicians to have realistically low expectations of them, that still doesn’t stop me feeling aggrieved.

Perhaps worst of all, though, is the sense of disappointment I felt. Elsewhere in the leaflet, as she always does, Jane listed the important meetings and events she had attended. And she is, as I’ve noted, the local MP and a government minister. She has clout—a lot of clout—with the council, with public services and private companies in the constituency. That she is using her leaflet to take credit for something a non-entity councillor took ten years to deliver was a disappointment. Instead it should be full of what she’s done to make Battersea better.

I was not party to the now-withdrawn legal action brought by the Battersea Park Action Group to stop Formula E racing so can only speculate on the full contents of the agreement. (In doing so I can’t help but note the irony that one of the big complaints about the council’s handling of Formula E has been the use of ‘confidentiality’ as an excuse not to release details.)

However, it’s hard not to look on this as a major victory for the campaigners.

The public statement in itself is a pretty big win. The park will be reinstated to its previous condition and Formula E will pay costs. In return the protesters will not campaign against the 2016 event. Separately, but with interesting timing, both Formula E and the council announce that this will be Formula E’s last hurrah in Battersea Park.

How much difference the campaign made is anyone’s guess. It may well be that Formula E was looking to go elsewhere, many Formula E fans expressing disappointment appended the observation that Battersea Park was a poor venue. But even if that was the case, it’s clear that opposition to the event was getting far more attention from Formula E than it ever did in the council chamber.

Sometimes though, you don’t need to know the precise cause and effect, you can just celebrate.

I’m not even that sure the news will be taken that badly in the council. It was truly an example of Cllr Cook’s forceful leadership to get Formula E in there but I suspect he will be one of the few genuinely sorry to see it go. Despite the public face of unity in support of Formula E I know many councillors and officers were privately unhappy with the event.

For everyone else, whether their concern was instinctive or came more thoughtfully, it seems like there’s finally good news. Well done to the residents, park users and campaigners who have done so much to make sure Battersea Park can continue to be a vital asset for everyone, every day.

Many years ago I was a judge in the first LGIU Cllr Awards, another judge commented that it was hard to judge between a councillor who achieved something by virtue of their position, as an executive member, perhaps, and those that achieved something because they were a terrier, focused on an issue or cause that they pursued relentlessly and doggedly while they slowly but surely persuaded others.

It’s a metaphor that has stuck with me, and one that gives me solace when it comes to some of my pet topics. Occasionally I think I make a difference, I remember being one of just two people in a meeting supporting open data, but now I think Wandsworth can claim to be one of the more open councils in the country (although most of the credit on that is down to the national policy climate). Most of the time I can only admire the tenacity of those who employ the terrier approach, and wonder what, if any, issues or causes I would have the patience to persistently champion when I return to the back-benches.

So I look at Philip Beddows determined campaigning for Battersea through the Love Battersea campaign, which he started as a councillor and has continued ever since he stood down, with huge admiration.

His latest triumph was unveiled this morning: a sign welcoming those leaving Clapham Junction station to the heart of Battersea.

Although it was installed overnight, it was not an overnight decision, he can point to the very first time he raised the idea in February 2009. Ever since he has continued to remind, chivvy and encourage those involved to get to this stage. I can speak from experience—having been tangentially involved in the process—that the ins and outs of negotiations, legal agreements and just funding it, would have ground a lesser man down. I have no doubt that without him it would never have happened.

His battle against the Claphamisation of Battersea is one that he seems to be winning. Recently it feels like the tide has turned, with people and businesses increasingly getting their location right. This, hopefully, marks a turning point, since the station is the chief culprit for people’s mistaken impression that SW11 is Clapham: there’s now a sign, in the station itself, letting people know it’s in Battersea.

Battersea has a long and proud history, and a vibrant and exciting present. We should all be proud of the Battersea identity and, like Philip, do what we can to protect and champion it.