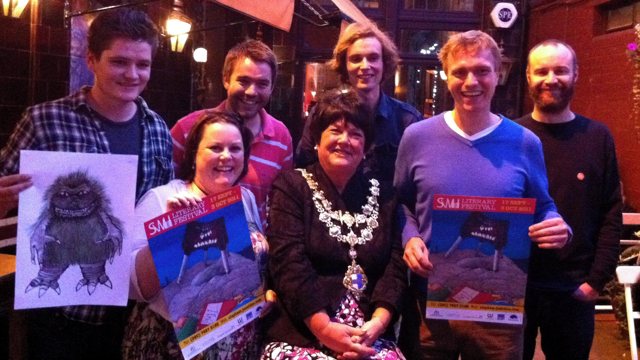 The theme for the year is Monsters: which might be offensive to some of the more genteel authors on the programme, but is all good fun. The festival runs from 17 September until 3 October (you can download a programme or get more information from the Clapham Junction town centre website).

Running throughout the festival is the SW11 Monster Hunt, where you can find various monsters hovering around the SW11 area. They are either in shop windows or found using an iPhone or Android app (I’m afraid I don’t have a link to the Android Marketplace version).

The launch event also created the opportunity to create your own monster – mine, of which you will see I’m very proud, is small but clearly that’s only so he can create terror in the most confined of spaces. You’ll also note that his wings are uneven. This is an evolutionary advantage, so he can fly in circles. Or something.

The festival always features a range events so there is something for everybody – and it provides a good excuse to get out and show support for your local town centre businesses.

Last night saw the formal end of the SW11 Literary Festival with the closing event at Recipease in Clapham Junction.

The event itself was fantastic, seeing the announcement of the winners of the recipe competition (which will all be part of a cookbook) along with some great food and company. But I really wanted to congratulate all the people and sponsors involved in festival. It has become part of the local cultural calendar and attracts people to the events from far and wide. If I have any complaint it’s that some of the events weren’t well co-ordinated with my diary (Chris Patten and Mark Thomas both clashed with meetings at the Town Hall) – but that’s something I’ll have to take up with the organisers next year!

One part of the festival is still running, however, and that’s Battersea Poems. There’s still time to text in your entry if the muse strikes!

Well… not quite… but this Sunday between 12 noon and 1pm Wandsworth will be represented on the fourth plinth in the shape of the Clapham Junction Town Centre Manager – Lorinda Freint.

And while you can’t get up there with her personally, you can get your message there. Lorinda will be promoting the SW11 Literary Festival which has been running all month, and thanks to the marvels of modern technology you can Tweet or text your messages which will displayed on a very low-tech whiteboard!

To be in with a chance of getting your message up there text PLINTH then your message to 07786 202844 (charged at standard rate) or tweet using #sw11 as the hashtag.

And while you’re texting for the world to see – why not make your text rhyme for Battersea Poems. I mentioned Battersea Poems in my weekly wrap-up last Friday and the service is now live.

It’s good to see there are a few poems on there already – you can read them (and hopefully be inspired to write your own) on the Thumbprint City website.

If you want to submit a poem you just have to text BATTERSEA followed by a space and then your poem to 07786 202844. It is a standard mobile number, so will cost you the same as any other text you send.

Battersea Poems runs until the end of October and the best poems will be included in an anthology published later this year.

Also published is the programme for the 2009 SW11 Literary Festival (which runs from 7 – 30 September). You can download the programme from the Clapham Junction town centre website.

Summer laziness
As I mentioned last week, things do start getting quieter during late July and August and my council work this week really showed that – I’ve managed to go the whole week without a single trip to the Town Hall. While that doesn’t mean I’ve done nothing (I’m sadly all too available on the phone and via email) it’s quite nice to think that I’ve managed a whole week without a visit to Wandsworth High Street.

More meetings with the police
Following on from last week I had another session with the local police on Thursday, this time with Nick Cuff, who is now the chairman of the Regeneration and Community Safety Overview and Scrutiny Committee. It was a useful session and concluded with a short patrol with one a constable from the Tooting town centre team. I hope to do a fuller post about it next week.

SW11 Literary Festival
If there has been one theme it’s been planning for what happens after summer. While there are a number of events planned one of the bigger ones (in terms of time and venues) is the SW11 Literary Festival. This morning saw the launch of the festival’s recipe contest – which will ultimately result in an SW11 recipe book.

The reason I mention this is not my love of food (which I clearly love too much, along with alcohol and not exercising enough), but because it meant I stood on St John’s Road for a good while this morning and was amazed at the number and persistance of ‘chuggers’ – those professional fund-raisers who try and stop you in the street and sign a direct debit.

Again, I want to post on this next week – mainly so I can consider and mull over my thoughts – but I’d be very interested to know other people’s views on chuggers.